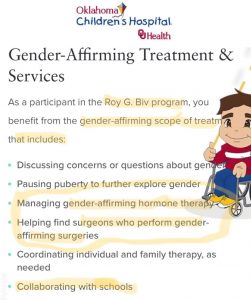 These surgeries are being performed on children who don’t even know what they want for breakfast and we are allowing them to make life changing decisions based on their feelings in that moment?

These surgeries and puberty blocking hormones are child abuse in every sense of the word. Adults who force, coerce, encourage, or permit a child to undergo irrevocable surgery or hormonal mangling are guilty of physical, sexual, emotional, and mental child abuse. Their is a statute in Oklahoma that makes provisions for a life sentence in cases of the most egregious child abuse, which this clearly is. Anyone who would do this to a child, or support doing this to a child is absolutely demonic.

An Oklahoma lawmaker says he plans to refile legislation prohibiting anyone under 21-years-old from undergoing gender reassignment treatment.

Sen. Warren Hamilton, (R-McCurtain), says his planned legislation would make it illegal for a person younger than 21 to undergo gender reassignment medical treatment.

Hamilton says the bill would also make it illegal for a parent or guardian of a child under 18 to obtain gender reassignment treatment for the child.